Blog - Latest News
You are here: Home / Your Judgment May be Impairing You 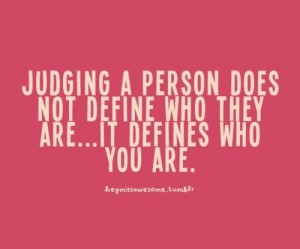 Judgment is a tool that actually impairs a mediator. While it’s human nature to judge people as dangerous or not, the notion of good or bad is one that only makes us feel superior in our ability to pass judgment on them. As the quote says, it does nothing for us.

As mediators, listing to people tell their stories, the trained human response is to decide which story we believe, or which seems right, or more credible. The mediator’s job, in contrast to those things is to understand. To understand that the story we’ve just heard is that person’s offering, their truth. And what they need from us is to understand it and to honor it as such. We don’t have to agree with it, or validate it, or ratify it, we simply need to accept it as their truth, and make sure they understand that we have done so.

The challenge to one being a really complete mediator is their ability to hold two separate truths simultaneously. Can you? Can you hear to stories that sound 180 degrees different and hold them both, and still be of value to them in helping them reach an agreement that allows them to put the dispute behind them without scratching the itch of needing to know who is right? Or whose truth is closest to the real truth? If so, then you may be cut out to be a mediator. If not, you may just need more practice at suspending judgment and really, deeply listening to people, while quieting the chatter in your mind that’s busy judging. If you can learn to do that, then you will see the world in a different light. That is the light of the mediator.

Welcome to the new WMS Blog

On Apologies…. Once Again!

MEDIATION AS AN ART: WHAT DAVINCI AND THE MASTER MEDIATOR HAVE IN COMMON

#4Steps: Getting Clear about Our Intentions
0 replies